Thanks to @MatthieuTriclot for his tweet about this paper.

This very fine paper goes over bullshit and its inner mechanisms in the workplace. It starts from the thesis that we live in a post-truth era and that all of us are facing bullshit - consciously or not and at different intensity levels - in the professional environment. Despite this prevalent presence, we are still unable to define it properly and act against it. The authors thus provide the C.R.A.P framework to 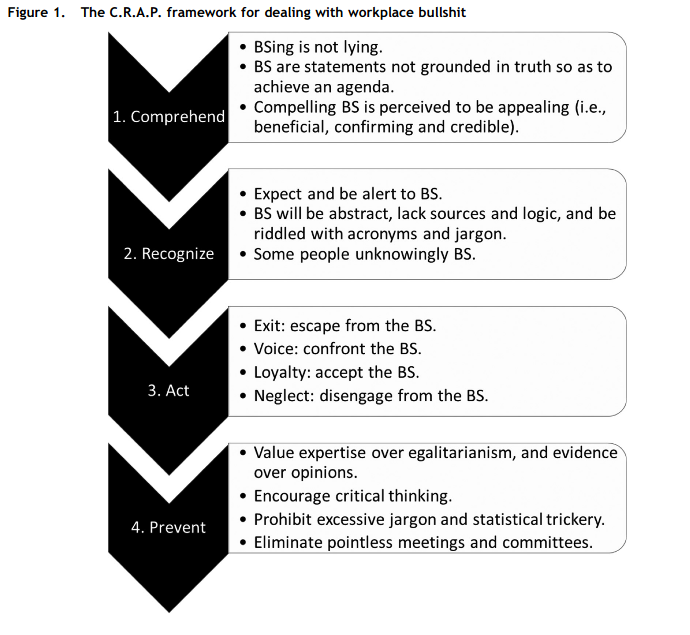 We all see bullshit thriving in workplaces: useless meetings, fancy charts, meaningless announcements, base-less decisions and sometimes even wonder never ceases about why bullshitters arise in the upper levels of an organization hierarchy and have so much influence. Thus the paper start by defining «Bullshit» as follows:

The disregard-for-the-truth aspect of the definition underlies how bullshit is a form of misrepresentation that differs from lying. A liar is someone who is interested in the truth, knows it, and deliberately misrepresents it. In contrast, a bullshitter has no concern for the truth and does not know or care what is true or is not

In other words, to tell a lie, the liar must know what is true.

Which is precisely what makes it particularly hard to combat:

The lie is designed and communicated under the direction of that truth, whereas the bullshitter has more freedom because they do not care about the truth and are not constrained by it.

Workplace bullshit is so prevalent nowadays that the first rule the author explain is to be vigilant:

The first rule of bullshit recognition is to expect it… In other words, it is necessary to develop a healthy cynicism about the possibility of bullshit.

And it goes further into what to expect, that everyone knows but no rarely admits publicly:

When faced with ‘jargonese,’ often people assume that they are missing something, or they confuse vagueness for profundity. The rule holds however, that if it is not possible to understand what the words in a statement mean, then it is reasonable to suspect the statement to be bullshit.

A probably very common example a lot of people might identify to, eventually even more for those coming from technology-oriented companies:

For example, consider a colleague at work who is told by a senior manager that a planned new product will deliver certain benefits to customers despite the existence of sound logic and good evidence to the contrary.That colleague may accept and even pass on the bullshit simply because they find it highly appealing (beneficial, confirmatory, and credible). […] Instead, they resort to inadequate ‘satisficing’ (a portmanteau word of satisfy and suffice) to make suboptimal decisions (Simon, 1956). Or, they may have been caught up in the hype and the related jargon, buzzwords, and acronyms behind the new product.

The paper uses the «enhanced» Hirschman’s framework to go over the possible ways against workplace bullshit:

Exiting is a likely reaction when employees are so appalled by the bullshit that they cannot stay with the organization or unit, or when they are already disillusioned, and the bullshit (possibly the latest bout in a stream of bullshit) is the last straw.

Voicing is the act of employees speaking up to confront what they consider to be bullshit. Employees may ask to see evidence that supports the suspected bullshit. They may themselves provide bullshit-challenging evidence along with alternative statements, and when doing so should be cognizant that simple and coherent bullshit will tend to be more appealing than intricate and complex truths

The propensity to voice also depends on the extent to which employees have organizational commitment; that is, whether they care for and believe in the organization enough to want to counter the harm of bullshit, combined with their perceived ability and capacity to make a difference. Such conditions are necessary for effectively confronting bullshit. A principle known as Brandolini’s Law states that the amount of energy needed to refute bullshit is an order of magnitude larger than is needed to produce it.

Loyalty occurs when employees correctly recognize that a statement is bullshit yet decide to go along with it. In doing so, they accept and become accomplices to the bullshitter. They may do so for various reasons: out of allegiance to the original bullshitter, or because they find the bullshit personally appealing, or because they genuinely believe the bullshit is somehow good for the organization.

Neglect is the act of disengaging oneself from the bullshit and the work surrounding it.Workers who choose neglect as an approach to dealing with bullshit may have tried to voice in the past but found themselves criticized, ignored, and even marginalized.

As often, the most efficient way to avoid something from happening is to prevent it before it does. It takes investment and thorough discipline by managers to enforce such a company culture against workplace bullshit. It basically lies in four bullets:

There should be an organizational culture in which individuals are encouraged to ask what the basis of a statement is; to question the strength of that basis; and as-needed-to propose alternative statements, related evidence, and supporting tests

Statements grounded in strong evidence should trump statements based on opinion regardless of how appealing the statement or the colleague making it might be. In other words, as attributed to the late senator Daniel Patrick Moynihan: “We are all entitled to our own opinions, but not to our own facts.”

To make it easier for non-experts to remember and spread bullshit, bullshit statements and jargon can be simplified into acronyms and abbreviations to help the bullshit spread meme-like from person to person in an organization and beyond. Consequently, to prevent the production and spread of bullshit, organizations should prohibit the use of jargon, acronyms and abbreviations.

[…] Organizations should demand that visualizations of data have axes that are appropriately scaled and labelled, and that bar charts extend to zero to show the absolute magnitude. In sum, ask yourself: Does the visualization make a statement that properly reflects the underlying data, or has the visualization been designed to emphasize a bullshit agenda?

They take as example an email shared within SpaceX:

In further emails on the same topic, Musk says that jargon and acronyms are inherently untrustworthy and a sign that colleagues are doing meaningless work.

[…] organizations should only establish committees and have meetings when there are clear terms of reference, a value-adding agenda, and the right attendees who can contribute to the desired agenda. More simply, the need for a meeting should be questioned unless an important decision needs to be made.

This paper and its wonderfully named C.R.A.P framework cover situations and environment that are becoming the norm, and unfortunately not only in the workplace.. This was both a fun paper to read and a sad one, as it depicts a harsh reality about what professional environments have become today.